Ancient Mansion of the Brownes, Galway

Researching the paternal (Usher/Ussher) side of my family brought me to Galway City many times. Griffith’s Valuation in 1855 recorded Matthew Usher as the occupier of a house, bakery and yard at No. 3 William Street. It adjoined a passage way leading to No. 3 a which was an office and yard. With the help of the Valuation map, the exact location of the house and bakery was found, showing the passage and courtyard which ran behind No. 1, 2 & 3 William Street and some houses on Abbeygate Street. A chance conversation in 1999 with Tom Kenny in Kenny’s bookshop aroused great interest. Tom mentioned he had an old drawing of houses on William Street and Abbeygate Street which seemed to correspond to this location and later he gave me a copy. The sketch was dated 27 July 1878 from a magazine called The Architect . It stated that this was the ‘Ancient Mansion of the Brownes, Galway’ and was ‘now being restored by Messrs. Perry and Reed’. It showed damaged buildings at this intersection. One shop sign was visible on William Street as ‘Whites Bakery’ and next to it on the left hand side, very faintly visible was part of another bakery, but only two letters from the end of the Usher’s surname ‘rs’ can be seen. It was exciting to see this sketch but I wished that more of my ancestor’s bakery could be seen. 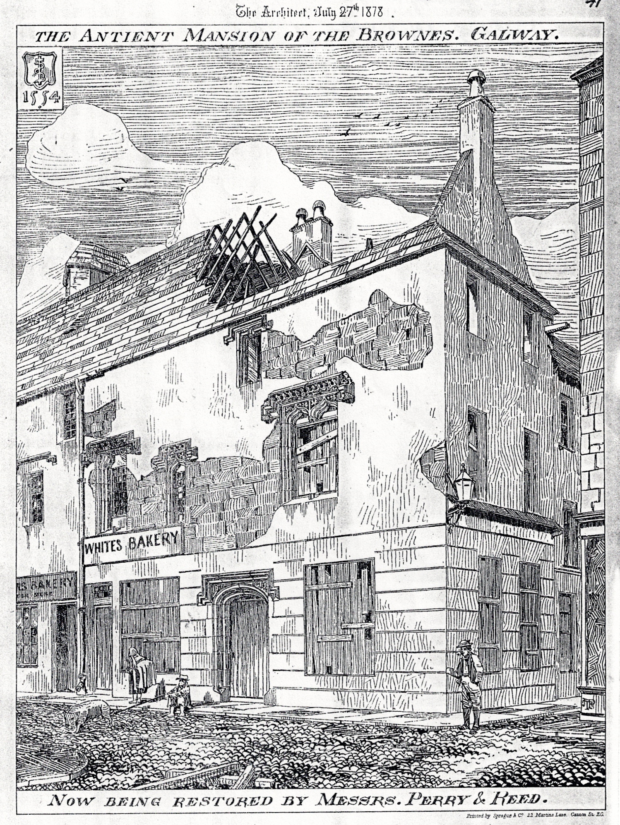 At the National Library I found the copy of The Architect, which stated that the buildings in the sketch had recently been damaged by fire, and for some time they were in risk of being removed altogether, but they are now under restoration. It stated that all the buildings of Galway City throughout the mediaeval period were strongly affected by the connection which existed between its inhabitants and those of Spain. Up to the sixteenth century, the trade of Galway with Spain in wine was very considerable, and its imports from that country were considerable. The article continued:

Among the ancient buildings Lynch’s Castle and the old Browne Mansion, both at the corner of Abbey Gate Street, are the most important, and a view of the later published this week will give a better idea of the character of the work. This house is a three storey building which has in later times been divided into shops and tenements, but which has its upper floors still entered by the external staircase from a courtyard in the rear which is so Spanish a characteristic of all the large houses in the town. The house was built in 1554, shown by date carved in the spandril of the basement door and was erected by the Brownes, the Lords of Oranmore as their town house. It is shown in the 1651 map very much as it now stands, but with battlemented parapets around the high pitched roof; it is also mentioned on the plan as the house of Martin Browne.

It was exciting to find that this was the original town house of the Browne family, one of the ancient ‘Tribes of Galway’. Checking the Revision Book of Griffiths Valuation in 1878, the surveyor’s noted the buildings on William Street as follows;-

No. 1 & 2 are burned and No. 3 nearly all burned. Rebuilt but part thrown into street to improve footpath in front. Same height as before.

I eventually found details about the fire in both the Galway Vindicator and Galway Express on 29 December 1877. Apparently two days before Christmas, early on the Sunday morning, a fire broke out in the house of Mr. Hession in William Street. It spread to the adjoining houses occupied by Patrick White and Matthew Usher on William Street and two houses in Abbeygate Street. The cause of the fire was not known and fortunately no lives were lost, due to the quick action of one local man, James O’Mara, who rescued people from the upper storeys. The military and constabulary were quickly on the scene and saved the fire spreading to adjoining premises which stored petroleum. The newspapers reported that Messrs. Hession, White and Usher were insured but sadly the two people in Abbeygate Street lost all their possessions. Among the debris the next morning were many Christmas cakes as well as other provisions. A fund was set up immediately by the Bishop of Galway to help those that suffered in the fire.

These premises are known today as ‘The Four Corners’ run by the Powell family, directly opposite Lynch’s Castle, now an AIB bank. The archway/passage at the side of No. 3 William Street is still in existence today, but the external staircase described above and mentioned in Valuation House Book in 1854 is long gone. When you compare the present building with the 1878 sketch there is one noticeable difference. The building is curved and not at right angles as shown in the 1878 sketch. It seems some aspects of the medieval carved moldings of the Browne house survive on Abbeygate Street, and there are still some lovely examples on the walls over the archway passage way on William Street. It was disappointing for me that so little of Matthew Usher’s house and bakery was shown in the 1878 sketch, but it was still a fascinating discovery. While writing up this article, I was surprised and delighted to come across the Four Corners building listed on the National Inventory of Architectural Heritage. Have a look and compare with the 1878 sketch.