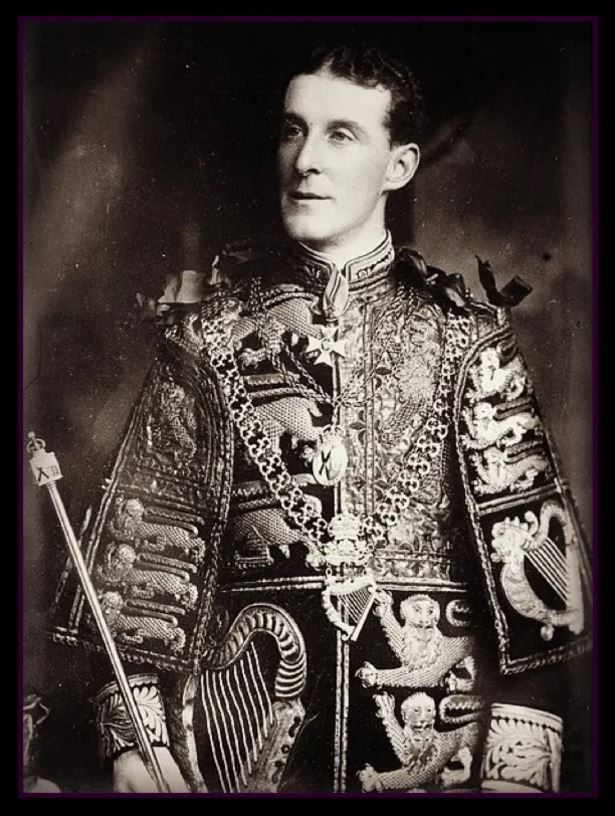 Sir Arthur Vicars was born in Leamington Spa , Warwickshire, England on 27 July 1862.  Following his formal education, he moved to Ireland where he remained for the rest of his life.

Arthur became an expert in the associated fields of genealogy and heraldry and on 2 Feb. 1893, following the recent death of his predecessor Sir Bernard Burke, he was appointed Ulster King-of-Arms, a post first created in 1552, (although a herald of arms for Ireland is first recorded in 1382).  In this position Vicars was responsible for the granting and confirming of arms for all of Ireland.  His offices were in the imposing Bedford Tower at Dublin Castle. (The AGI badge depicts the cupola of the Bedford Tower).

During his time as Ulster King-of-Arms Arthur Vicars published, in 1897, An Index to the Prerogative Wills of Ireland 1536 -1810, a listing of all persons in wills proved in that period.  This important work, for which genealogists who followed on will always be thankful, took on greater significance following the destruction of so many original wills in the Four Courts in 1922.

Arthur Vicars had an illustrious career. He was knighted in 1896 and in 1903 was elevated to Knight Commander of the Victorian Order (KCVO). He was a Fellow of the Society of Antiquarians and a Trustee of the National Library of Ireland. He was also a founder member of the Kildare Archaeological Society. However his glittering career came to a shuddering stop in 1907 following the discovery of the theft of the very valuable insignia of the Order of St. Patrick – the so called Irish Crown Jewels – of which Vicars was custodian. (the jewels were held in a safe in his library).  King Edward VII called for the removal of Vicars who, despite vehemently denying any involvement in the theft, resigned in ignominy.

Vicars left Dublin and retreated to Kilmorna House near Listowel Co. Kerry. He married on 4 July 1917 to Gertrude Wright. They had no children.

On the morning of 14 April 1921 (exactly 100 years ago today as I write), during the height of Ireland’s War of Independence, several dozen armed IRA men attacked Kilmorna House and set it alight.  They then took Arthur Vicars into the garden and summarily executed him, believing him to be a spy. He was aged 58.

Sir Arthur Vicars was buried in Leckhampton, Gloustershire. His will, not made public for over fifty years, contained an explosive accusation relating to the crown jewel heist. He wrote “I was made a scapegoat ….. they shielded the real culprit and thief Francis R Shackleton”.  Shackleton, a member of Vicar’s staff as a herald, was the brother of the polar explorer Ernest Shackleton. The Irish Crown Jewels have never been recovered.