A recent commission to explore some gravestones at Carrickbrennan Graveyard in the south Dublin suburb of Monsktown provided a welcome excuse for an excursion. Entering the graveyard through a small gate in a ivy clad high stone wall on the east side of Carrickbrennan Road the atmosphere, familiar to those used to visiting old, disused, and overgrown graveyards, was immediate. ate.

Carrickbrennan Graveyard is the final resting place of many individuals who provide a window into historical events of the 18th and 19th centuries in Ireland (amongst them Charles Haliday [1789-1866] historian and writer; Joseph Holt [1762-1826]  1798 Insurgent leader in Wicklow and Wexford,  Captain John McNeill-Boyd [1812-1861] and the men of the Coastguard vessel Ajax along with many casualties from Irish Militia Regiments aboard the Prince of Wales and the Rochdale both of which foundered off the coast of Monkstown in the early 19th century).  However, a barely legible inscription on a grave close to the entrance caught my eye: 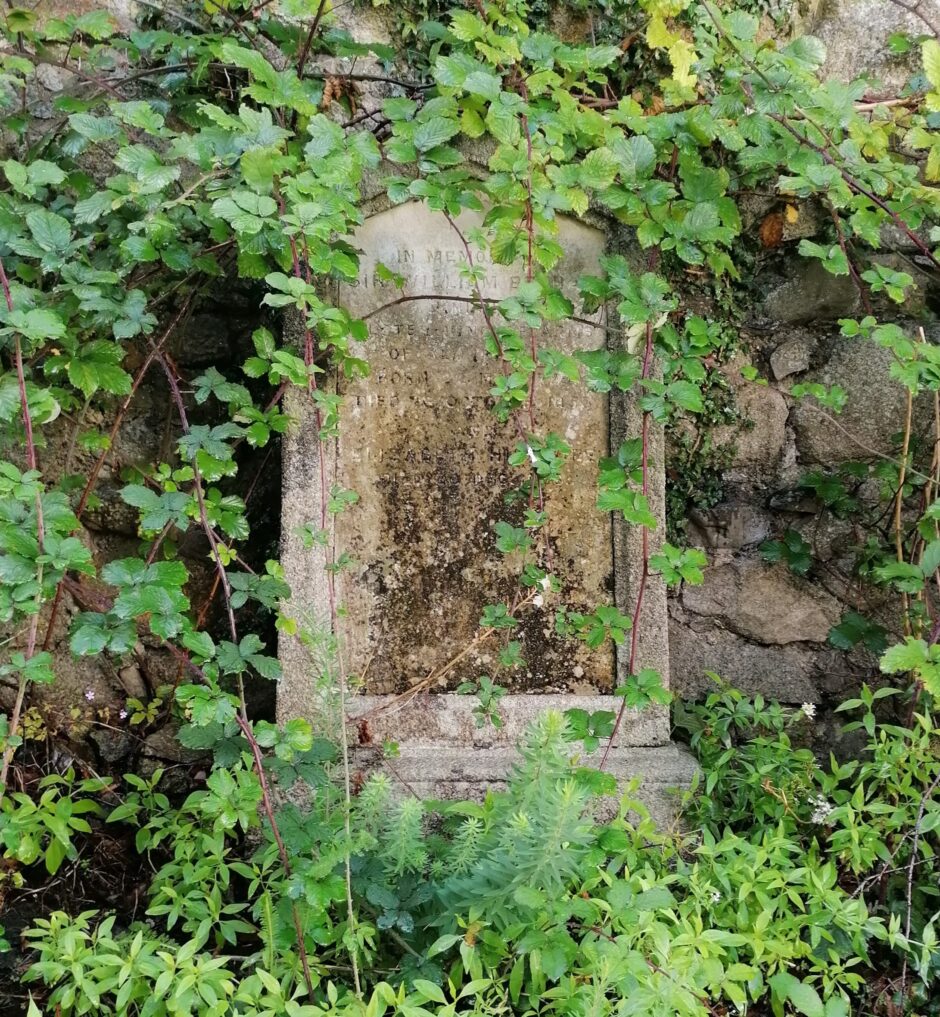 For genealogists Sir William Betham is an important character. Seeing his grave made me think for the first time about his life and how he came to such prominence. William Betham was the eldest surviving son of fourteen children born in Stradbroke, Suffolk, UK to William Betham and Mary Betham (née Damant).  William Senior was a clergyman and antiquarian involved in genealogical research and it was while working with his father that the younger William was first exposed to the discipline.   A chance visit to Dublin in 1805 and his apparent dismay at the neglected state of the archives in the Record Tower in Dublin Castle led him to his future life and work in Ireland. Almost immediately, William Betham became deputy to Philip Stanhope (Viscount Mahon) Keeper of records in the Record Tower and thus began a lifetime of arranging documents and creating indexes.  Betham’s activities however did not stop there; by 1807 he was appointed Deputy Ulster King of Arms; he was Knighted in 1812 and by 1820 he was appointed Ulster King of Arms.  His interest in preserving Irish historical documents was in part catalyst for creation of the Public Record Office which opened in Dublin’s Four Courts in 1867, fourteen years after his death. William Betham was also interested in Irish Antiquities and famously disagreed with renowned author and antiquarian George Petrie resulting in termination of his membership of the Royal Irish Academy.

Amongst his best-known achievements are his genealogical abstracts (available as Betham Genealogical Abstracts and the Index to Prerogative Wills of Ireland, 1536-1810 (compiled from Betham’s Genealogical Abstracts but published in 1897 by Sir Arthur Vicars (1864-1921) – both available online (https://www.findmypast.co.uk).  Included in his work were many genealogical sketches and pedigree charts and having had reason in the past to consult some of the original manuscripts, I have always been thankful to him for providing the key to cracking open hitherto unbreakable brick walls.

Restoration work on Carrickbrennan Graveyard was carried out in the mid-1980s.  At the time, the graveyard was surveyed, each headstone was numbered and plotted, and all headstone inscriptions were recorded followed by research into those buried there. This invaluable work was instigated and initially carried out by a teacher and pupils at Dun Laoghaire VEC, later supported by AnCO workers, Dun Laoghaire Corporation and others.  With such work and foresight, the memory of those buried here has been secured for posterity.