NOT THE BISHOP OF IPSWICH

My grand aunt said that her grandfather was the bishop of Ipswich, but he wasn’t. Aunt Eileen was only ten when her mother died so I can allow for her not knowing much about him. That might even have been a nickname if he was the pompous type — or just a story her mother made up for the little girl.  I eventually found his name on his daughter’s marriage record (but no occupation) and, oh joy, the church record named her parents as Stephen and Jane Bloomfield of Limerick. We didn’t know of any Limerick connections so that was new.

I knew nothing about his daughter apart from her name, Arabella, she was English, a Protestant, and disowned by her family for marrying my great-grandfather which wasn’t unusual, but she wasn’t.  Luckily, I found her in the 1901 census one week before she died and she gave her place of birth as Woolwich.  Someone’s geography was bad.

Cutting short the story of a more than 20 year search, I eventually found Stephen’s Attestation or Discharge Papers from the British Army : 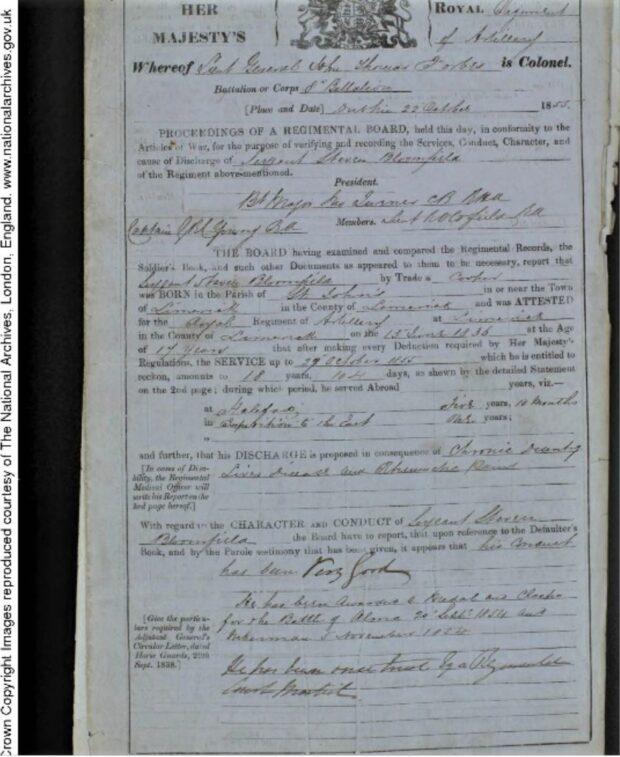 he was born in St John’s parish, Limerick (no, it was St Mary’s); enlisted in 1836 when he was 17 (he was 23 but that’s a minor detail) in Limerick (other records claimed that he joined in 1841 in Fredericton, New Brunswick but apparently one could claim more money if one enlisted abroad), served 5 years in Halifax, Nova Scotia, 1 year in the East and was awarded a medal and a clasp for the Battles of Alma and Inkermann in 1854 during the Crimean War.  He was discharged in 1855 in Dublin due to dysentery, liver disease and rheumatism, probably as a result of his time in the Crimea.  Conduct “very good” although he had once been tried by a regimental court martial !  However, in spite of being a pensioner of both Kilmainham and Chelsea, he seems to have rejoined the army after only a few months, probably for security.

In 1847, Stephen married Jane Celia Harley in Newington in the borough of Southwark in London. Jane’s father, James, a brickmaker, was (according to the 1841 and 1851 censuses) born in Limerick.  When she was listed with James, his wife Jane was recorded as being born in Limerick as well but, after his death, her birthplace was recorded as Surrey, probably the Southwark-Walworth area.  No record of their marriage has yet been found.

Stephen’s marriage record (after 10 years in the army) records his occupation as cooper not a soldier so that might be why he faced the court martial. Permission to marry was not automatically granted as there was always a shortage of married quarters so he may have felt that if he presented his superiors with a fait accompli that they would have to give him accommodation which seems to have worked.  He and Jane were moved around a bit, the first child was born near Dover, one in Scotland, one in Dublin and the rest in the Woolwich area, seven altogether.  All were baptised in the Catholic church so it seems unlikely that Arabella was disowned by her family for marrying a Catholic herself.

I found two of the three youngest, Teresa and Stephen Arthur, living with their grandmother, Jane Harley in 1871. She died in the workhouse 5 years later.  In 1881 Teresa was a saleswoman working in a drapery store and living in staff quarters over the shop with her colleagues in Paddington.  No records found for her or anyone else in the family since then in Britain or in Ireland.  Not even death records, so maybe they emigrated or joined the army.

Apart from Arabella who got married in the Pro-Cathedral in Dublin in 1878.  Thank goodness for their detailed marriage records.

So much for the Bishop of Ipswich.

And all the other misinformation.