Situated at 17 Berkeley Road, Phibsboro, Dublin, Richard Byrnes Victuallers was established in 1877 by newly married couple, Richard Byrne and his wife Mary Anne Sweeney. The couple were neighbours before they were married, living next door to each other on Great Britain Street [now Parnell Street]. While Mary Anne’s father, Peter Sweeney was a fruiterer, Richard’s father, Simon, was a victualler. Between them, they had the makings of a formidable team. Sadly, Richard died in 1878 of smallpox just a year after they were married leaving Mary Anne a widow, with a very young son, Simon (named after his paternal grandfather). Six years later, tragedy struck Mary Anne again, when Simon died at just 6 years old. Records show that he contracted meningitis. Oral family history suggests that this was contracted after he was hit by a horse and cart outside the shop on Berkeley Road. 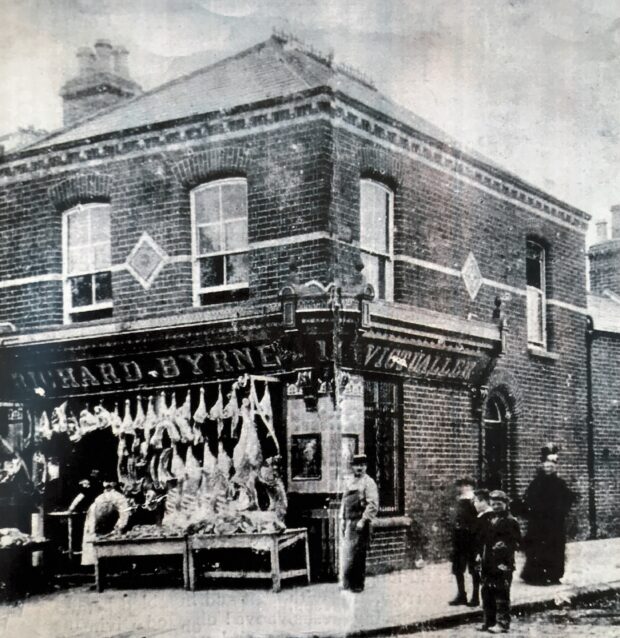 Despite this double tragedy, Mary Anne continued to not only ply her trade, but develop the business into a very successful enterprise. Whilst she was brought up in the retail trade, through her father, her background was not in butchery. But despite her lack of knowledge in the trade and the obvious gender disadvantage in an industry dominated by men, she was successful. Her business acumen was strong and she built up a strong client base, invested her profits wisely, mostly in properties and built up a sizeable estate during her lifetime.

She married again in 1888 to James Hannon, a Salesmaster, born in Dublin in 1862. Interestingly, and perhaps a sign of the times, as soon as she married James, he became listed as the Victualler and if one did not know the history, one would be forgiven in thinking that the business had been established and built by him. The couple had two children, Joseph and Mary Gertrude. Around 1900 the business was renamed as J.J. Hannon Victuallers. Her son, Joe, took over the business after her death in 1922 and developed the business further. In the 1930s and 1940s, the shop did a trade of 9-12 cattle and 60 or more sheep and lambs per week. This must have taken some organisation considering the small fridge (an ice box in earlier days). The trade of the shop consisted of passing customers as well as a large number of contracts with hotels, religious institutions and even Presidents! The business remained in the Hannon family until it was sold in the 1980s by Mary Anne’s eldest grandson.