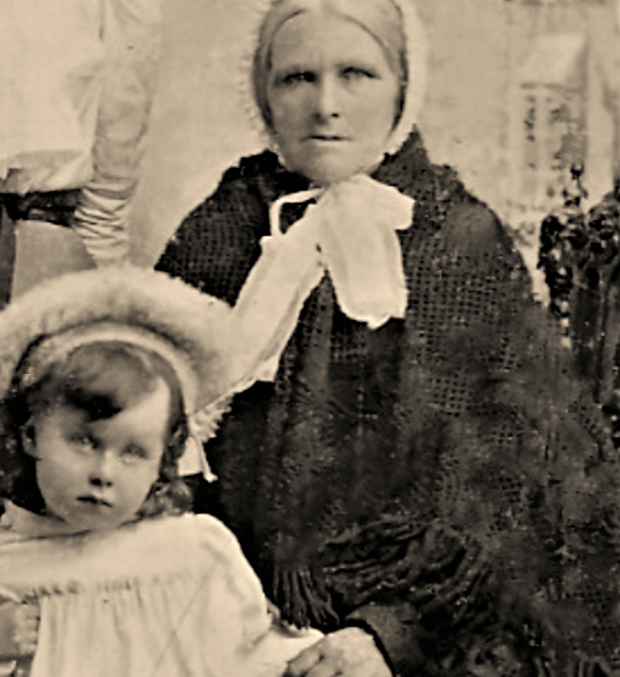 Mary Discan married into the Glynn family on 7 February 1859 when she became the wife of John Glynn, of Kilbannon, Tuam, Co. Galway. It isn’t known when or how the Glynn family came to Kilbannon, or for how long they were living there at the time of the marriage, perhaps they have always been there. Certainly, early maps from the pre-Famine period show a dwelling on the same site as the current house. Locally, it is said that the present two-storey house was once a small, thatched cottage and when the family were adding the second storey sometime in the early 1900s, they lived for a time in the adjacent barn where a large stone fireplace can still be seen.

Mary was originally from Dunmore which is located a few miles from Kilbannon. It’s possible the pair were matched by their fathers. Unfortunately, Mary’s father’s first name isn’t recorded on her church marriage record, though a Catherine Discan, possibly her sister, is recorded. It isn’t known if Catherine herself married, though this is an avenue that could be investigated further.

A signpost to her parents’ identity is also recorded on Mary’s death notice. The Tuam Herald reported that Mary died on Friday 11 May 1923 ‘at the ripe old age of 85’. The report goes on to state that Mary was the sister of Rev. Michael Discan PP, Milltown and mother of Rev. Michael Glynn, PP Mountbellew and Rev. Dr. William Glynn, Utica, New York, and therefore ‘had the proud boost that not only had she one son a priest, but she had two sons who devoted their lives to God’s Holy Church’. 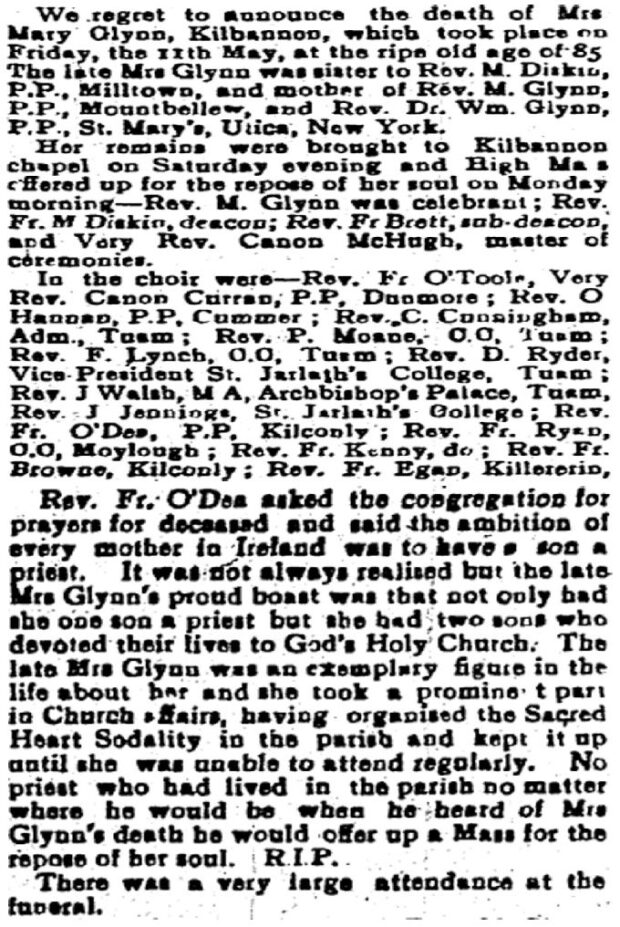 Death notice of Mary Glynn in the Tuam Herald

A search for a civil death record for Rev. Michael Discan records a priest deceased in Milltown in 1930 aged 81, a nephew Michael Diskan of Corohan, present at death. Corohan or Curraghaun is in the civil parish of Dunmore, a small townland situated between Milltown and Dunmore village, possibly the homeplace of the Discan family.

The church parish records for Dunmore begin in 1833 with gaps in the 1840s and 1860s for baptisms and in late 1860 for marriages. A search for the church baptism record of Michael Discan born c.1849 located only one in the parish around that time, a Michael born to a father William Discan and mother first named Honor and baptised on 25 September 1849. Other possible siblings included James (1837), Margaret (1840) and Bridget (1843). Unfortunately, no baptism for a Mary or Catherine could be found. Perhaps Mary was older than her professed age of 74 as reported on the 1911 Census.

During her life, Mary brought up three children and was widowed in 1877 aged 39, her husband John having died from bronchitis aged 50 in March that year. Until 1901 at least, as head of the household she worked the small farm that included the piggery, stable, cow house and barn. The couple were buried with their children in Kilbannon graveyard, the limestone Celtic cross listing some of their grandchildren and other relations too. Despite the little information recorded on her church marriage record, the snippet of death information has provided a further avenue for investigation and revealed a woman who was ‘an exemplary figure in the life about her’.