FOR THEM AND POSTERITY

The living come with grassy tread
To read the gravestones on the hill;
The graveyard draws the living still,
But never anymore the dead.
(From “In a Disused Graveyard” by Robert Frost) 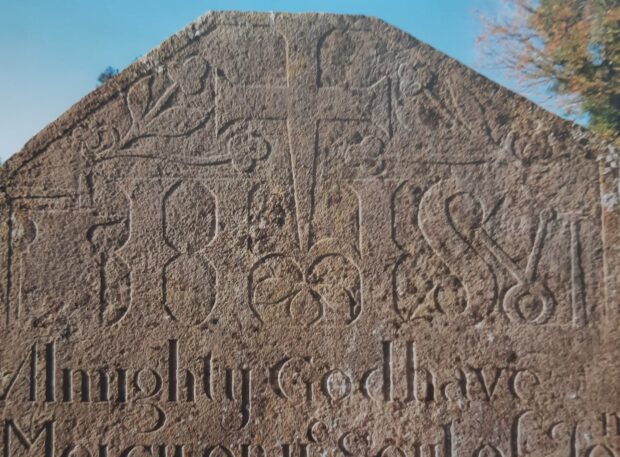 Graveyards hold a particular attraction for genealogists and nothing beats that sense of discovery when you uncover the inscription and carvings on an ancient memorial lost to the world for decades under a heavy mantle of moss and ivy. The best time to visit a graveyard is in early morning sunlight when the oblique rays of the sun shine on the carvings and make the headstone inscriptions come alive. Spring time is a particularly lovely time for a walk through an ancient graveyard in your locality when the birds are singing and the snowdrops are in bloom.

Some of our oldest graveyards are located away from villages and towns in the heart of the Irish countryside and surrounded by the land farmed by our ancestors over the centuries. These graveyards contain a wealth of parish history and local genealogy, give us a glimpse into the social history of a parish and often have their origins as Early Christian or Early Medieval ecclesiastical sites. In effect, they are outdoor museums to the history of a locality.

We tend to look at inscriptions on grave memorials to find family history details such as names and date of death to add to our family trees and such inscriptions are often the only means by which we can trace our family history further back in time than available paper sources allow. Many memorials in our old graveyards date to the eighteenth and nineteenth centuries and contain beautifully carved designs such as foliage and religious symbolism created by local or visiting masons and stone carvers. Images of religious symbolism, scrolls, spirals, scrolled leaves, angels, various styles of flowers, sunbursts, hearts, doves, crosses, winged heads are but some of the carvings to be found on memorials in our ancient graveyards.

Look closer and you may find an occupational symbol carved on a stone which will give further clues as to the trade or occupation of your ancestors and add context to your family history. The memorial in the photograph is from Ballintubber old graveyard in Co. Roscommon and shows carvings of the tools of a blacksmith either side of the IHS engraving on the memorial, namely an anvil, lump hammer, pincers and claw hammer. The memorial is dedicated to John Hopkins who died in 1802.

Other occupational symbols to be found engraved on memorials in our old graveyards include the tools of the trades of carpenters, farmers, stonemasons, tailors, shoemakers etc. So, next time you are walking through an old graveyard in your locality take a closer look, you may be surprised at the family history clues that are hidden in plain sight