A PICTURE PAINTS A THOUSAND WORDS … 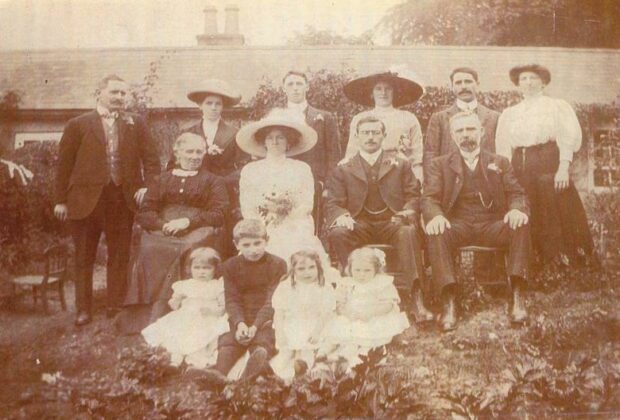 This 1912 photograph of the wedding of Daniel Harrington and Mary Ellen Byrne captures three generations of the Byrne family in Lucan, County Dublin. It was taken in the front garden of the bride’s parents’ home, which comprised of a 2/3 roomed cottage. Perhaps another photograph was also taken of the groom’s side of the family. Perhaps that photo may have been given to his parents or a family member to be framed and hung in a Harrington household in Cork.

While this photograph captures a moment in time, from a historical and genealogical perspective, cumulative record information relating to each of the 14 individuals within this photo points in two directions, forward by more than 60 years for some of the individuals and backwards by more than 60 years for some older family members. This single image chronicles over 120 years of human life and living with the potential for genealogical discoveries of more family members, before, during and after those individuals photographed on that September day in 1912.

With this photograph and the civil marriage record, basic information of names, occupations and ages could be discovered in addition to data relating to the bride and groom’s respective places of origin, with their fathers’ names and occupations. Detailed information on each of the 14 individuals in the photo could be scrutinised in the Census of 1911 along with their relationship to one another which could facilitate the discovery of the names of other family members, such as brothers/sisters, aunts/uncles and perhaps grandparents. In this particular case, the Census records of 1911 and 1901 provided information not only on the grandparents of the children in the photograph but also their great grandparents. From this starting point and aided by civil and church records of births/baptisms, marriages and deaths, two further generations of family members could be established. Thanks to information within these records as well as background data contained in the Census of 1851 it was also possible to uncover that a Margaret Byrne, a grandmother of the bride, lived to claim the state pension when it was first issued on Friday, 1st January 1909. Those same family members had lived through hurricane-like conditions that hit Ireland and survived the ‘night of the big wind’ on 6th ~ 7th January 1839 as well as the famine years that were to follow in the 1840s.

In 2022, thanks to the advent of the smart phone and its components, most people carry around with them a high quality camera, so the taking of photographs and capturing particular moments in time has never been easier, a fact many of us take for granted. That was not the experience for most of our ancestors. For a considerable number of people, photographs were taken primarily on special occasions and generally by a professional photographer. Shots had to be processed, negatives developed and the number of photographs may have been limited because each photograph came with a cost so family occasions and financial circumstances were deciding factors.

In the 1970’s, Rod Stewart recorded a song called ‘Every Picture Tells A Story’. So discovering old family photographs is a priceless treasure trove as each and every picture provides the potential to become a starting point for discovering more about the generations that have gone before us.