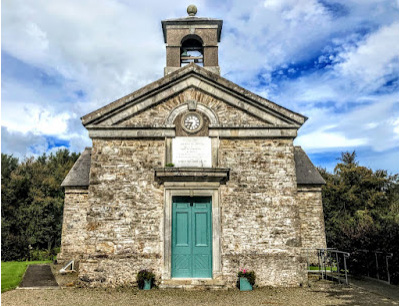 By the close of the eighteenth century many of the descendants of John Homan, Esq., (of Moategranoge, Co. Westmeath, d. 1683) had migrated toward Dublin; my mother’s ancestral branch had by then established itself at Ardenode (otherwise Ardenwood) near Ballymore Eustace, Co. Kildare.

In the year 1812, Isaac Homan (a Dublin barrister and second cousin to members of the above branch) found himself a victim of “heavy and unforeseen” pecuniary circumstances and was obliged to depart Dublin with his wife (formerly Anne Cramer) and child for North America. What particular occurrence drove Isaac Homan, then forty-six years of age, to take himself and his family to a humble log cabin “in the wilds of Georgia” will ever remain a subject for speculation.

The family lived peacefully in their humble home amongst the pine forests, with trappers and hunters and “red Indians” for neighbours. However, it was not long before Isaac’s talents and capabilities, adapted to the requirements of his new surroundings, drew the attention of the influential class. Subsequently, he keenly accepted an invitation to attend a Council in Philadelphia where an appointment to a senior post was to be conferred upon him. Whilst at the Council meeting Isaac was exposed to a draught from an open window, and by the time he returned home he had developed a fever from which he expired in just a matter of days.

His widow and their young child, Philip (then about thirteen years of age), departed for the east coast and, in the depth of winter, booked passage on a ship bound for England. Just before embarking, the widow Homan had sewn into her dress a quantity of gold coins as security, though it weighed her down considerably. Several days into the voyage a gale raged into a violent fury causing the ravaged vessel to roll over and sink beneath the tumultuous waves … but not before a few sailors fastened together a raft made from pieces of broken masts. All aboard had perished except the widow Homan, her son Philip and a few sailors. After many days adrift, they spotted a rocky desolate island and managed to disembark from the raft, then to be greeted by the island’s sole occupant, a tall bedraggled old hermit whose name was Jerry Leeds. This poor hermit lavished immediate attention on the mother and child, providing warm animal skins for their comfort and freshly caught fish and birds for their sustenance. Throughout the bitterly cold winter months the wind, dampened by sea spray, howled through their makeshift shelter but, despite the hardship, Mrs. Homan’s quiet fortitude and unassumed courage never failed her.

One Spring morning they spotted the white sails of a ship advancing from the horizon. Signals were hoisted and, before long, Mrs. Homan and young Philip were homeward bound, though not before bidding farewell to the man who had saved their lives. Jerry Leeds had wished to remain behind – a king in his lonely domain. It was later recalled that Jerry Leeds was “a man of great stature and, although a European by birth, was almost a savage in many of his habits; he was however kind and hospitable”. 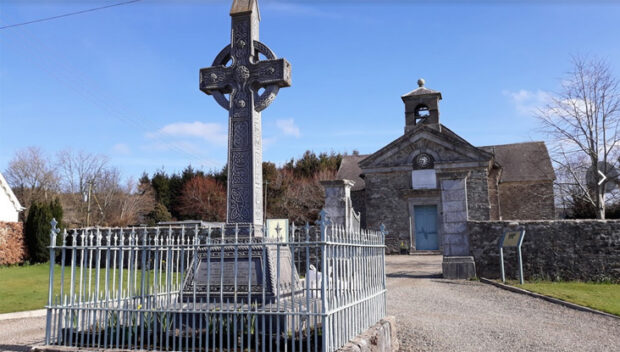 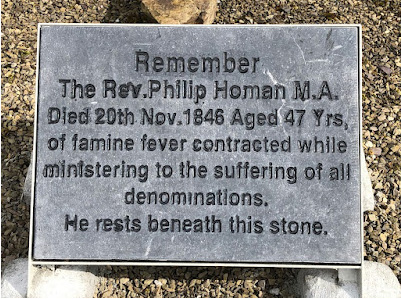 A plaque at Villierstown remembering the Revd Philip Homan

Mrs. Homan acquired a dwelling house in Dublin and Philip attended Trinity College; he subsequently took holy orders and was made Deacon in the Diocese of Cloyne in 1822.  Also in the same year, through the influence of his cousin, Sir William Homan, Bart. (brother-in-law to Lord Henry Stuart) he was presented with the chaplaincy of Villierstown.  Rev. Philip Homan married Miss Maria Cameron on the 16th November 1828 at Lismore Cathedral and the couple had six children: Charlotte, Annie, Philip, Eliza, Fanny and Cramer.

Rev. Philip Homan died on the 20th November 1846. His gravestone inscription reads as follows –
“Remember the Rev. Philip Homan, M.A., died 20th Nov. 1846 aged 47 yrs. of famine fever contracted while ministering to the suffering of all denominations. He rests beneath this stone.”
There is a memorial tablet in his memory at St. Carthage’s Cathedral, Lismore. 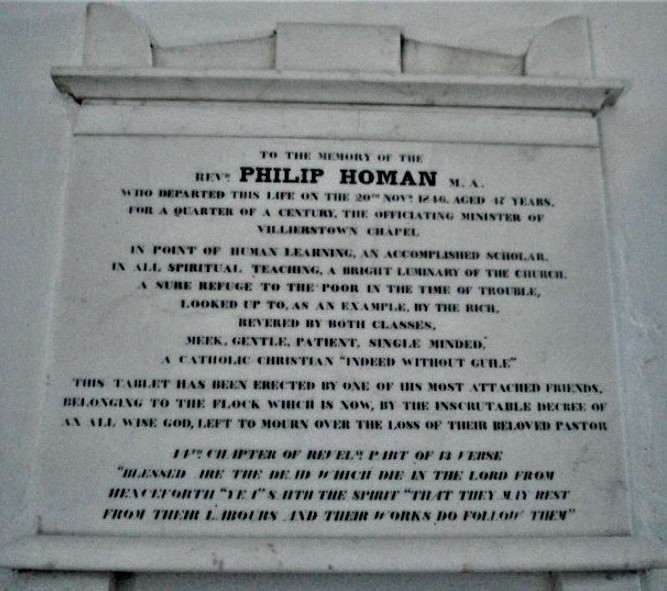 The hardship and privation that was impressed upon the child had undoubtedly moulded the character of the man, as he had left behind amongst those who knew him recollections of a nature entirely unspoilt and devoted to the welfare of his flock. Such fond reminiscences were dutifully recounted in a slim volume entitled “Memories of Villierstown”, published in 1872 and authored by one of his daughters, Mrs. Charlotte Susan Johnson (C.S.J.). It is from this book that the quotes (in inverted commas) derive.