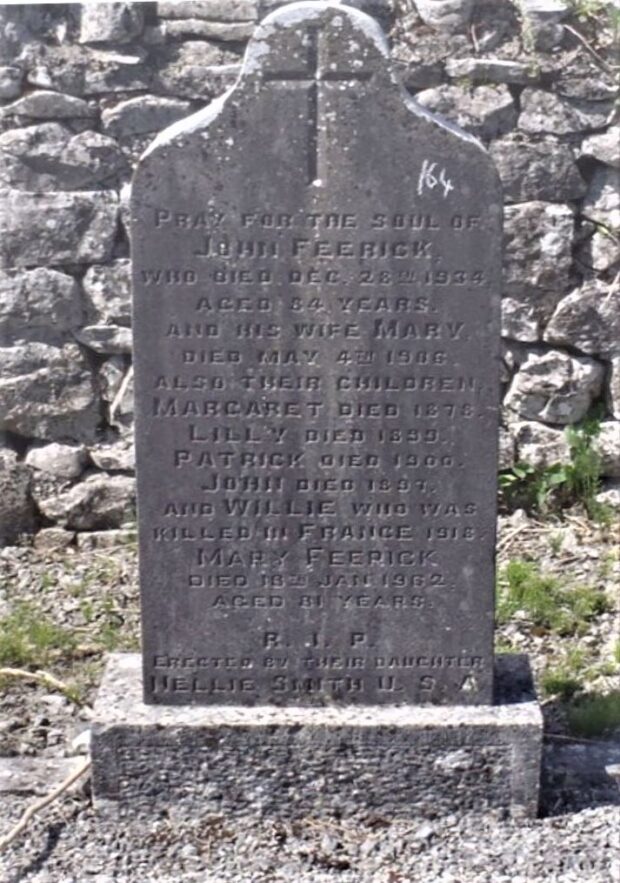 Born in Ballinrobe to John and Mary Feerick, William’s short life ended in the WW1 Spring offensive of 1918; he is buried near Pozieres in France close to Thiepval.

His early life in Ballinrobe was not without its difficulties. He and his brother, John, were twins; John was born half an hour before William on 18th January 1897. However, John died 21 days after birth; he had been suffering from Asthenia for fourteen days, a condition where the child lacked the strength and energy to thrive.

In 1901, they family lived together in a stone-built, thatched house with two windows in front; they had just three rooms for the 8 members of the family. His father was a printer-compositor from County Galway and his mother, Mary Colleran, was the daughter of a farmer, William Colleran, who lived near Ballinrobe. Altogether, the couple had 11 children and William was their last living child.

William’s mother, Mary, died on 04 May 1906 at the age of 47 from “supposed bronchitis” as there had been no medical attendant. By the 1911 Census, there were just three people left: his father, John, his sister, Mary, and William, a 13-year-old schoolboy.

William joined the 6th Battalion of the Connaught Rangers in 1915 when he was 18. He died on 23 March 1918 at the Battle of Saint Quentin when he was 21. The impact of the attack on the British Expeditionary Force was so severe that Churchill, who happened to be there as Minister of Munitions, described it in these terms: “there arose in less than one minute the most tremendous cannonade I shall ever hear…The weight and intensity of the bombardment surpassed anything which anyone had ever known before.”

Hostilities between the German and English Armies began at 04:40 on the morning of 21st March in what was called the Kaiserschlacht (Kaiser’s battle) or Operation Michael. It was Germany’s attempt to win the war before the Americans arrived on the Western Front.

A sustained and targeted bombardment using high explosives and poison gas rained down on the Allied lines followed by the full force of five German divisions bearing down with tremendous speed. The 6th Battalion of the Connaught Rangers had never seen anything like this even in the worst days of the Somme. They did not stand a chance. In this and in the following days over 7,500 men were killed, and 20,000 prisoners were taken. The 6th Battalion of the Connaught Rangers was reduced to 5 officers and 281 men who were soon transferred to the 2nd Battalion of the Leinsters.

The last resting place of William Feerick together with a great many of his comrades is just outside the town of Pozieres. He is on Panel 77 of the Memorial with his fallen comrades of the 6th Battalion of the Connaught Rangers.  William’s name is included on the Feerick family gravestone at Ballinrobe Abbey, Co. Mayo.