HAND IN HAND WITH MARGARET AULSBERRY IN HER WIDOW’S WEEDS 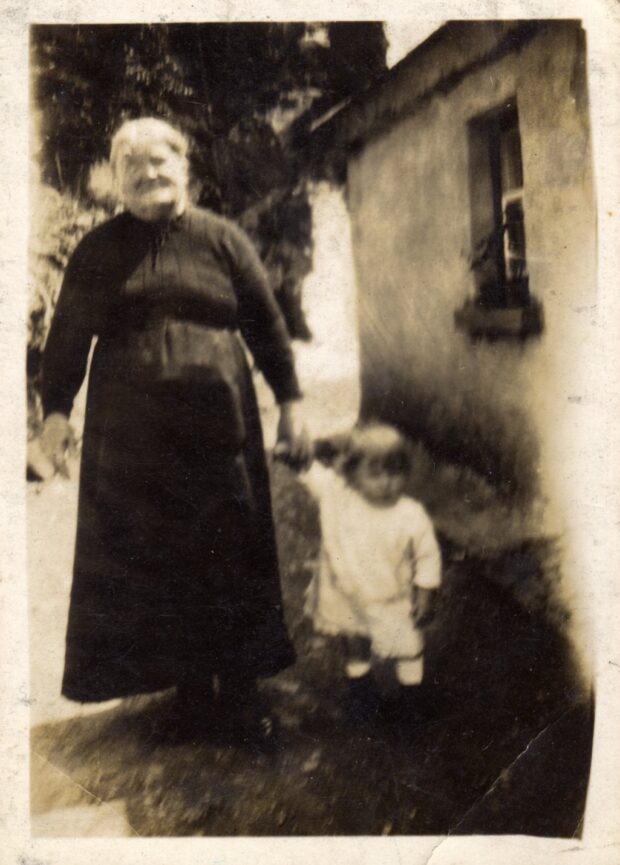 Here’s a lovely old photo of my great grandmother Margaret Power nee Aulsberry at  her home at Whelansbridge in Kilmeaden, Co. Waterford. The child holding her hand is probably my mother Breda (nee O’Connor), as all her siblings had curly hair – so 1934 or thereabouts. Margaret was baptized on 17 June 1860 in the local catholic church of Ballyduff.  She was the daughter of Thomas Aulsberry and Mary Cuddihy, locally known as Cuddy, who were married during the Famine in 1847.  Aulsberry is a rare surname in Ireland and those of the name currently in Waterford and Co. Carlow are mostly descended from Margaret’s brother Maurice Aulsberry. There are lots of variants, the shortest Alsbury; the longest maybe Allesberry. One family tradition has it that the eponymous ancestor came to Waterford from England as a gardener in the late 18th Century.

Margaret married Patsy Power, her neighbour at Whelansbridge, who was a stonemason like his father before him (who built the cottage in the photo) and his sons who followed after him.  Patsy was twelve years older than Margaret and had been previously married to Nano Hickey, who died of consumption in 1886, leaving two young sons behind.  Patsy had a further ten children with Margaret, prompting a timely addition of an extra bedroom in the early 20th century.

When her husband died in 1930 Margaret dyed all her clothes black and thereafter only wore her ‘widow’s weeds’, as per the photograph. The custom is common in many traditions, the ‘weeds’ derive from an Old English word for garments or clothes.

Margaret Power nee Aulsberry died on 9th June 1941 at Whelansbridge aged 80 and is buried in the family grave at Ballyduff.  One of my mother’s earliest and fondest memories, as she often recounted to me, was the feeling, the sensation, of holding her grandmother’s hand.