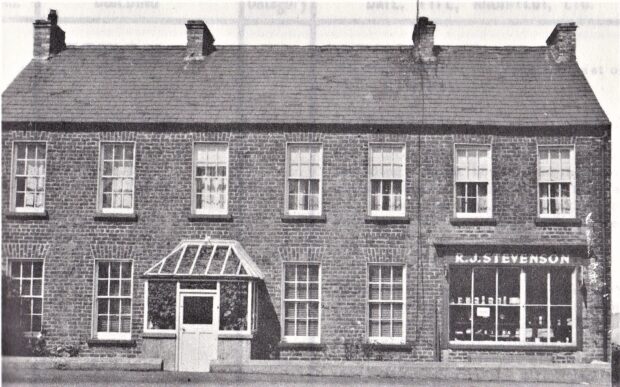 This photograph of the Stevenson family home, Bannview House, at Derrytrasna, near Lurgan, County Armagh was published in a report of historic buildings of Craigavon by Ulster Architectural Heritage Society (1970). The photograph of Bannview House which appeared in this survey shows that the house incorporated a shop and sub-post office.

This house, built in 1850s for John Stevenson (my great-great-grandfather), was at one time a linen receiving centre in the age of the cottage weaving industry, where weavers picked up yarn and deposited finished cloth.

Bannview was also the subject of a dispute, concerning the “matter of the estate of John Stevenson [died 1894] deceased”, between 2 branches of the Stevenson family which came before Mr Justice Barton at the Chancery Division in the High Court of Justice, Dublin on Monday 14 December 1914. The action was brought by Jane Stevenson and Joseph H Stevenson. In essence two branches of the Stevensons were living in the family home and they didn’t get on.

The last occupiers of the house were two spinster ladies, Emma Louise and Caroline Ellen Stevenson. On the latter’s death the house was inherited by a nephew, Jack Stevenson, who was farming in Sussex, England. Although Jack had plans to modernise the house it was booby-trapped by the IRA while it was vacant. Bomb damage caused the building to be demolished in December 1972. The site is now occupied by council bungalows.

Ultimately, I believe (but have not proven) that the Stevensons arrived in this part of north Armagh, from northern England, in the middle years of the 17th century either as Quakers seeking religious freedom or as linen weavers encouraged over by the Brownlows (Lord Lurgan). There was a considerable growth in the settler population, largely English, in north Armagh in the 1660s and 1670s. After the crushing of the 1641 Rebellion Sir William Brownlow was anxious to attract English settlers to his estate. From the mid-17th century he developed the small town of Lurgan as both a centre for Quaker worship and of the linen industry.