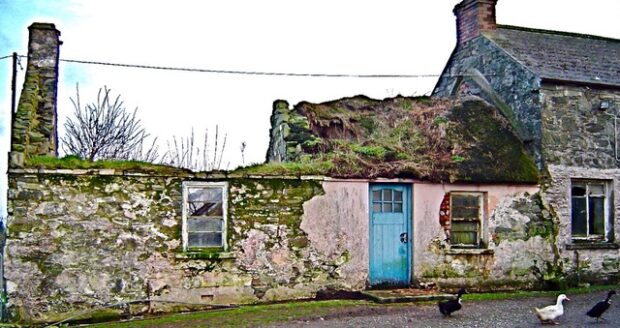 Back in the 1950s, while my grandmother was still alive, she used to talk about the townland of Ballygally, between Killyleagh and Downpatrick. Although her grandparents came from there, it was visiting an elderly aunt in the area that seemed to evoke her strongest memories. She talked about having to clamber over dry stone walls and ditches to reach the cottage.

It was many years later before I started to research the family history and even then, it was other branches of the family that held my attention. For a long time the Ballygally connection just remained plot 9 on the Griffith’s Valuation map. It wasn’t until I discovered the satellite imagery on Google maps that I decided to have a closer look at plot 9.

Suddenly it seemed quite accessible, so a visit to the area was soon on the cards. It was only then that I discovered the land was still owned by a distant relative and the family seemed pleased, if a bit bemused, that I was interested in seeing what remained of the old cottage. I hadn’t known what to expect – possibly just the site of where the dwelling had been – but when I discovered that part of the original cottage was still standing, it was quite exciting. Most of the thatched roof had caved in, but it was easy to imagine what it must have been like towards the end of the 1800s. The 1901 Census confirms it had stone walls and a thatched roof. There were two rooms for the family of three and two windows to the front of the cottage. The adjoining two-storey house was built around the mid 1920s and I imagine it must have provided a more comfortable standard of living for the family than they would have experienced in the cottage.