BAILEBÁN – NOT QUITE WHITEWASHED FROM OUR MEMORY 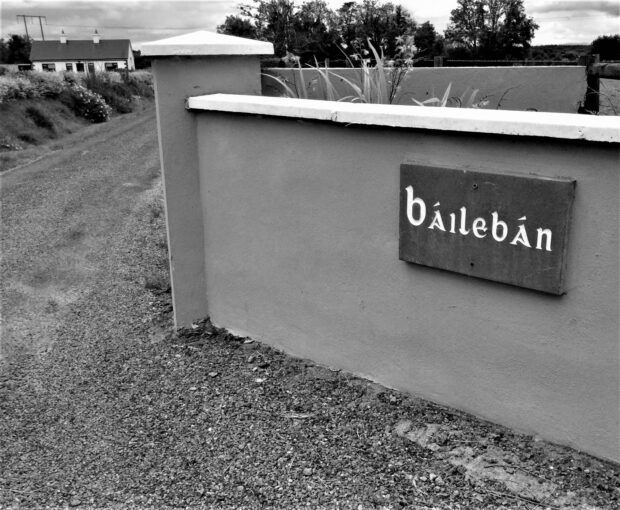 Inscribed on a wall plaque in the parish of Kilbannon, Co. Galway is the name Bailebán.  Local historian Ted Steede, who arranged for the inscription a few years ago, says of the name, which is commonly anglicized as Ballybane:

“There are quite a few Ballybane placenames in Ireland. The origins of the name go back to when the labouring classes living in clusters ….. used wetted lime to whitewash their cottages.  The lime was produced in the local limekiln by burning limestone from a local quarry.  Hence the name Bailebán – which simply means white village”.

My interest in the Bailebán of this image grew from my own family history research as it was the birthplace of my grandmother and all her siblings.  We are all used to seeing several names for the same place in the old records.  Ballybane is not an official townland name in Kilbannon; it could be considered a subtownland name. I knew that Pollacorragune was the townland in Kilbannon where my grandmother lived before emigrating to America.  I saw some birth listings for Ballybane interspersed with ones for Kilbannon.  Other records show the family at the same place over those years.  Until the name plaque was placed on the wall there was no indication of the place Ballybane to help visitors looking for it.

One explanation for the gradual disappearance of a placename in the records was that the area may have been reconfigured by the Congested Districts Board sometime during its operation between 1891 and 1923.  A Congested District was one whose population exceeded the ability of the land to support it.  To alleviate congestion the CDB would relocate some families to larger holdings.

Seeing the little Bailebán plaque on the wall is motivating me to get back to my own family history research, which I’ve been neglecting.  I am hoping to learn more about the changes in land occupancy where my ancestors lived in the 1890s and into the 20th Century.  Valuation Office Revision Books will prove very useful in this regard, I’m sure.