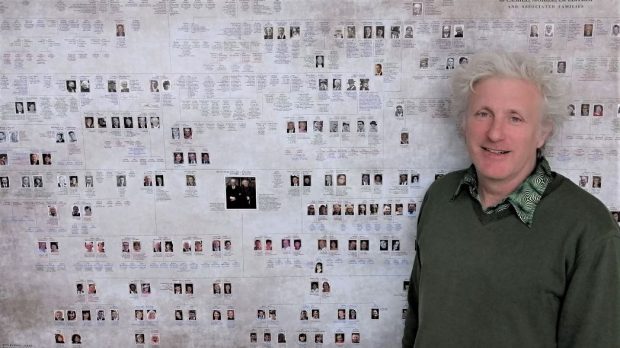 Tony Hennessy has been involved in the world of Irish genealogy in various guises for over thirty years. His interest and passion evolved through osmosis – he was surrounded in his youth by a heady combination of yarn spinners and tellers of tall tales on his father’s side and five ancient aunts with 200 year old memories on his mother’s side. He discovered early on that every family has a story to tell – but not everybody’s story gets told. That’s where he comes in …

RESEARCH: Working from his home in Waterford Tony carries out genealogical research for all of Ireland but has a particular interest and knowledge of Waterford and surrounding counties. He is also a Research Associate at IARC (Irish Ancestry Research Centre)

BESPOKE FAMILY TREES: Tony specializes in drawing bespoke family trees to commission. His largest to date has included 18 generations, 746 individuals and 205 photographs – he enjoys a challenge! His family trees have been presented to US Senator Bernie Sanders, Mayor of Boston Marty Walsh, Mayor of Chicago Richard M Daley and many others.

EDUCATION: Tony has been, since 2014, a Lecturer on the NUI Diploma in Genealogy at University College Cork and at the University of Limerick Certificate in History of Family & Genealogical Methods. He also has run, since 2010, a successful evening course in genealogy in Waterford City. He himself studied the subject in University College Dublin (1993-94) under the tutelage of Seán Murphy MA.

TELEVISION: Tony has carried out research on behalf of the PBS series Finding Your Roots with Henry Louis Gates Jr. He was also involved with the Irish documentary series ‘The Travellers’ in which both he and his family trees featured.

Tony has been a member of Accredited Genealogists Ireland since 2012.