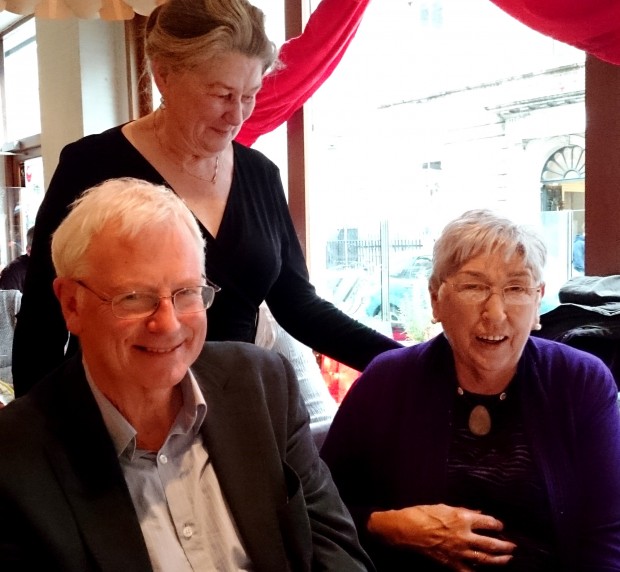 Accredited Genealogists Ireland (AGI) is pleased to announce that its very first Emeritus Member is Patricia Moorhead. She is a popular figure in Irish genealogy, known particularly for her witty and entertaining talks. Pat, as she is familiarly known to her friends, has been involved in family history research for over two decades. She was passed by the APGI (now AGI) assessors in 1999 and retained membership until a year ago, when she chose to retire.

At AGI’s Annual General Meeting in December 2015 a constitutional amendment was passed, allowing the Council to confer emeritus status on members or associate members who have retired. The status is not automatic on retirement. It recognised a long and valued association with AGI. Immediately after the AGM, a Council meeting was held at which Patricia Moorhead was named as the first person to receive Emeritus Membership. The decision was announced later that day at the annual lunch.

Back in the 1990s Mrs. Moorhead completed the diploma in Local History at NUI Maynooth and the Certificate in Genealogy at UCD, under the instruction of Sean Murphy. She took an active role in the Irish Genealogical Congress from 1994 and joined the committee of the Irish Family History Society in 1995. As well as having a career as a professional genealogist, Pat devoted much time to researching a relative who was awarded the Victoria Cross. Many of her projects led to fascinating and extraordinary coincidences, and to lectures that captivated and entertained of her listeners. Though retired, she intends to keep up contact with her colleagues by attending AGI events.